How to Avoid Being Killed by Evil Chef Robots 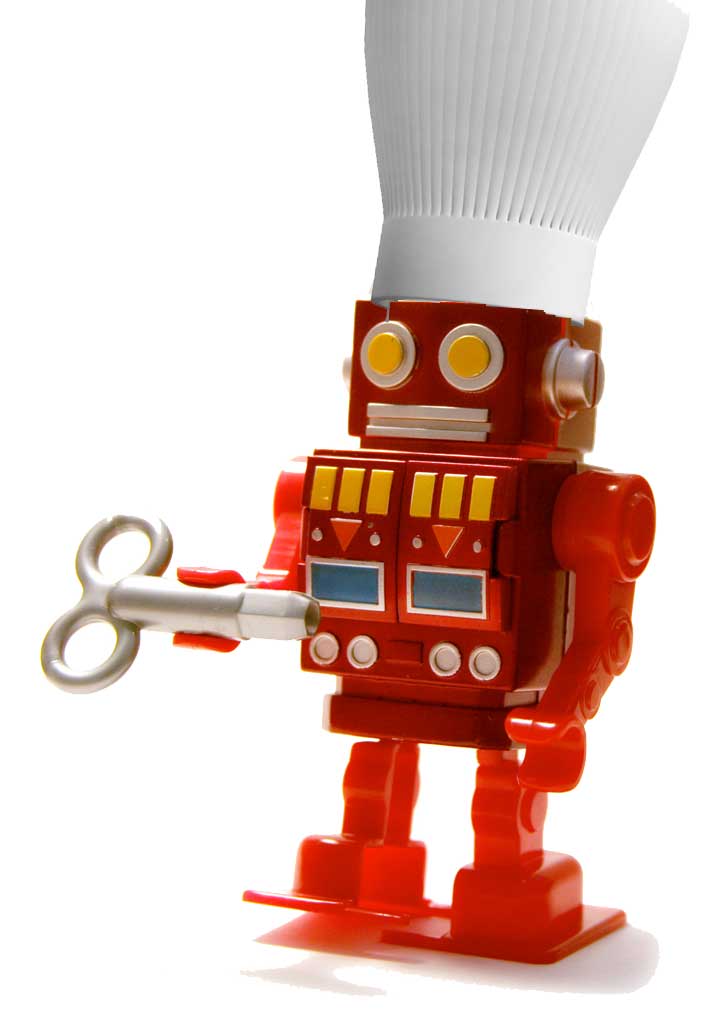 Have you met this guy? He’s a very sneaky sort of villain.

He’s what we call around here an Evil Chef Robot. And he’s just one of several marketing-type enemies that could hurt your solo business. Let’s take a look-see, shall we?

How to Spot Them

These buggers tend to catch your eye every time you get that feeling of overwhelm over how much  important marketing tasks you have on your To Do list.

You hear this tale about how a friend-of-a-friend-of-a-friend automated all their social media. They (allegedly) gained an extra three hours a day and now take power naps while you’re stuck at your desk trying to figure out how you’re going to fit Pinterest into your already over-loaded schedule.

You find out that guy used Hootsuite and before you can say Boston Creme Pie, you’ve got your own account hooked up and ready to go. Guess what? You’re this close to over doing it and letting the Robot Chef take over everything.

Here’s how to avoid going to the dark side:

1. Use the apps and robot tools sparingly.

Hootsuite is great. I use it myself. But what I don’t do is schedule every last tweet, Facebook post or LinkedIn share. If I did that, I’d be defeating the purpose of using social media to market my business. (Which, as you already know, is to build real relationships with humans — not robots.)

My recommendation is to save the auto-posting for those occasions when you know you’ll need a little extra oomph. That extended vacation doesn’t have to mean you go silent. And if you’ve got a product launch and you’re working with sponsors, you may need to ensure that specific tweets go out at predetermined intervals.

The idea is to stay away from automating your sharing as much as you can. Why? If you send out a tweet and somebody replies but you’re not there to “hear” it and answer it, people will wonder if you’re purposely ignoring them or just absent-minded.

No, you’re not expected to respond immediately to everything. But it will seem pretty lame if you’ve auto-posted a question (because those are the best kind to encourage engagement) and people respond to you, and then…crickets. Automate too much and folks will begin to ignore you or, worse — unfollow-unfriend-unlike the heck out of you.

2. Don’t try to be everywhere.

Choose two or three social media channels (where your ideal customers hangout most) and focus like a laser beam on owning those spaces. Don’t add anything new until (and unless) you feel you’ve mastered what you already have on your plate.

3. Be aware of cultural differences.

If you’ve got your blog or email campaigns set to auto-share on Facebook, be aware that the posts probably won’t show up much (if at all) in your fans’ newsfeeds.

Facebook has this thing they call “Edgerank” which prefers that you do your posting as a human. So be sure to follow up those auto-posts with one you do all on your own. This also gives you a chance to share with particular groups that might find your post useful, and to add a pithy comment or ask a question that might start a conversation.

Ten thousand Facebook fans is possible. But unless your fans grow organically, you may be amassing all the wrong types of people.

Also – Twitter followers that you gain through apps that auto-follow are not the best type to have. Yes, folks have built massively large followings using some of the tools. But do they know these folks? Have they ever exchanged pleasantries with them? Probably not. All they’re doing is creating a whole bunch of noise.

And really — why would you want someone to follow you on Twitter with the only goal to get you follow them back? There are tons of people auto-following and then unfollowing when the favor isn’t returned.

Obviously, there are many other tools for automating your marketing than can be covered in this little post. We automate everything from our emails to our calendars to entire campaigns. Some of this good and healthy. And some of this just makes us lazy.

My point is that your marketing — and specifically your time on social media — should be mainly focused on human-to-human interaction. Not promoting your latest thing.

Marketing-type tweets and shares should be no more than 20% of your overall communication. The rest should be sharing other people’s awesomeness and building relationships. Period. Stay vigilant. If you find yourself leaning more toward automation than conversation, it’s time to stop and assess. (<– There’s a reason “ass” is the root of this word. I’m just sayin.)

It might be happening because you’re not enjoying the process. And if that’s the case, then stop. Everyone can tell your heart’s not in it.