Get People to Hate You 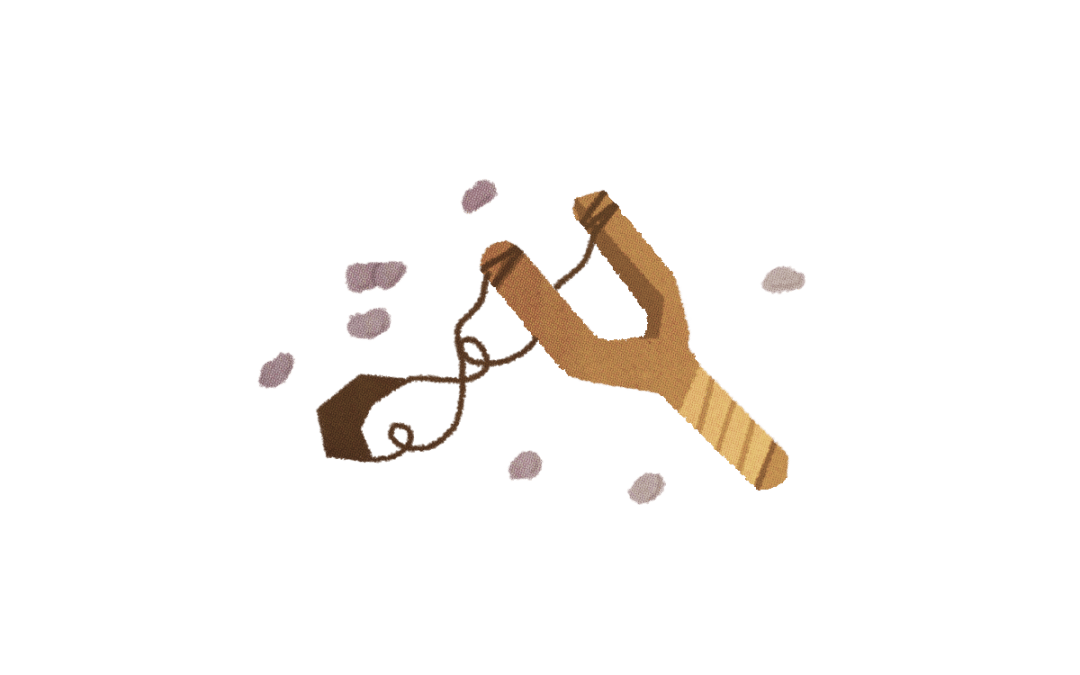 This post is part of the 30-Day Bloom Your Online Relationships Challenge. If you’d like to play along, you can sign up here (don’t worry — it’s FREE). We’re all working through these small, powerful actions together and sharing our questions, learnings and experiences in a Facebook group. And we’d love to have you join us!

We don’t always agree. We have some damn good fights in fact. But we always come away from them with a little more understanding and appreciation of each other. — Captain Sisko, Star Trek: Deep Space Nine

Always burn your bridges behind you. You never know who might be trying to follow.
— Enabrin Tain, Star Trek: Deep Space Nine

My secret to creating closer, more meaningful relationships: get people to hate you.

To be clear: I’m not talking about providing piss-poor service or screwing people out of their money. I’m talking about standing for something so big that some people are bound to say, “Hellz no” when it comes to working with you.

Let’s not wax philosophical about referrals, building a list, or trying to prove your business worth through likes, followers, or some other silly social metric. The whole premise of telling you how to get a referral is so… cliché. I mean, people are already out there telling you how to be a good person. I’d rather not do that. Anything practical enough to be useful would also be so generic that you’d be drowning in nonsense (“be generous” and “go the extra mile” anyone?)

Instead, let’s focus on the premise that people (who are also like you) will tend to do certain things certain ways. Mostly, because you and they believe certain things are true about the world. Would you say that’s accurate, if somewhat vague?

How does it feel when you encounter your polar opposite in terms of beliefs?

Someone who holds a worldview totally incompatible with your own? Are you energized? Ready to battle? Dismissive?

Cool. That’s awesome. What it means is that your convictions are both polarizing and powerful, with a lot of energy invested in maintaining them.

I’ve got a story that I think illustrates this concept nicely:

Rewind three weeks. There I was, sitting around a conference table with so-called social media experts. The client — a reluctant convert and self-proclaimed social media recluse — told us: “I don’t get social media. It seems like it’s really diluted the field of customers and it takes so much time, why would I ever want to do that?”

Here’s what he was saying: People like me have a Facebook page to keep up with our kids and grandkids. For everything else, we go to networking events or call or meet face to face after someone connects with us.

In short, there was ABSOLUTELY NOTHING any of us could have said to convince him that spending time on social media would benefit him.

“Have you tried blogging? You know, a blog (blah blah blah)” said Expert #1. Swing and a miss.

“The more often you post on Facebook, the more likely it is you’ll be top of mind when they need your services. Everybody’s on Facebook,” said Expert #2. Nope.

“Look, I get it. I just… it all seems like a waste of time. I like YouTube,” he tossed in casually. What he meant was that he liked wasting time with silly viral videos.

He didn’t get what I was asking. “Look, you’ve put a lot of time into doing what you’re ‘supposed’ to do. So, why are you considering doing Facebook or Twitter or whatever else because you’re ‘supposed to’? And why are you doing the stuff you’re doing now? Aren’t you just wasting time complaining about the latest thing that wastes your time? And aren’t you doing stuff that makes you look, feel, and seem just like everybody else? Aren’t you, just by participating the way you are, diluting your own client base?”

I pushed on, “What if, instead, every once in a while you would remind people of what you do for a living by sharing something relevant to your job that isn’t a sales pitch? The rest of the time, you could be working on telling the community’s story instead, because that’s what they want to hear.”

We wrapped up the discussion. His decision? The social media hermit is still a hermit. Old habits die hard and convictions take a lot of energy to build and maintain. He’s convinced that social media is a waste of time. And he definitely wasn’t a good fit for any of us.

But let’s say this guy walks into the Chamber of Commerce instead of a Social Media Experts group. Say the CEO offers him weekly networking meetings, face-to-face coffee exchanges with hot leads, lead and list exchanges, and a nifty phone referral service, too.

“Wow,” he’s gonna think, “these people really get me,” right before he signs up for a lifetime membership.

If you want people to become your customers, you need to elicit a strong reaction from them first. If somebody hates you, it stands to reason that somebody else probably loves you. It’s not so much the hate but the silence that should worry you.

If identity and convictions are one part of the love/hate equation, the other part is principle. Principle, distinct from convictions (which are also boundaries), is the story you tell about why those boundaries exist.

Four years ago, when I started my business, I had a really simple premise: “Do No Evil Isn’t Good Enough. Always Do Good.” Here it is, in my first moleskine: 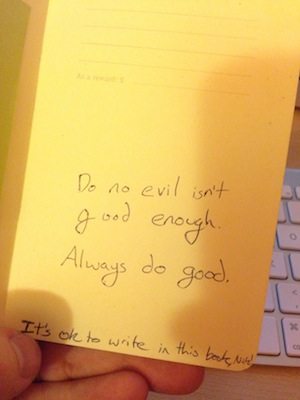 My guiding principle. One of ‘em, anyway. And it’s been painful as hell on occasion. (see “Related Reading #1“)

So why do I say, if you want good relationships, to get people to hate you? Because I don’t know of a better way to make people adore you than to stand for something through your principles.

About two and a half years ago, I was sitting in a conference room with some of my closest peers. I was debating changing the name of my business from WTF Marketing because I’d just lost my two biggest clients, been rejected from speaking at a conference I was absolutely perfect for, and my attempts at snagging new clients were met by derision: “That’s your business name? What does it stand for? Ew, I can’t do business with you, devil worshipper.”

I’d called the meeting just after one of the biggest restaurants in Fort Collins got all the way through my sales process to my contract. All we had to do was sign, they were ready to go – and that’s when the owner asked what my business name stood for. I told them. They opted to go with a different company because they didn’t like what WTF meant.

Think about that for a minute — they weren’t just objecting to WTF Marketing as a name. They were objecting to what they thought I stood for.

For the record, it took them another 2.5 years to settle on a new company, which I think speaks to the quality of our proposal and how much a pain in the ass this client would have been.

Anyway, back then I felt like I couldn’t pick up a client to save my life. I felt like my friends weren’t referring me even while I was doing some of my best work – things like CareerCamp and PodCamp and Ignite Fort Collins.

It was a dark time.

“How about Fugitive Marketing?” I asked my peers. “I like the sound of it. It matches my rebel-chic outcast kind of feel.”

“But you’re not an outcast,” said one of my friends. “ You’re warm and fluffy like a giant teddy bear. A teddy bear that knows how to present stuff to people in a way that makes them want to buy.”

WTF Marketing needed a set of guiding principles and fast. But it wasn’t going to get them, not at that moment. I was confused, defensive, hurt, and going broke. Worse: nobody knew what the hell it was I did — or why. They didn’t know where my heart was.

I mean, I was doing website design. I was doing social media management. I was doing marketing strategy. I was organizing unconferences. I was doing Gen-Y consulting. I was writing about how Gen-Y could get jobs without hating on Baby Boomers. I had my hands in all sorts of pies. I was everywhere. But nobody – not even me – could tell you what I did and or more importantly, why I did what I did.

No wonder it was so hard to build up solid business relationships. How do you refer someone to a handyman who is also a clown, gardener, artist, and writer? How many of those passions can someone possibly sustain?

Long story short, what eventually came from this and the space between: a set of guiding principles that went beyond ‘do no evil.’

The piece I was missing: WTF Marketing stands for unabashed honesty, even when it offends. That’s why it’s called WTF Marketing. You want to pay money to a ‘yes man’? Fine. That’s not what you get with me.

What does that unabashed honesty translate into? Instant trust.

When I make a recommendation, a suggestion, attend an event, give you my attention? That’s big. I don’t put my name on just anything. I don’t engage in revisionist history. I own my mistakes and make them public when there’s a lesson.

99% of my business is driven by word-of-mouth recommendations. People trust me enough to refer me to someone, and if I like what they do, we form a relationship. Easily 3/4ths of my first clients still work with me in some capacity 5 years later.

Business owners talk a lot about avoiding negative press. The opposite of love isn’t hate. It’s apathy. Nobody talks about things they’re apathetic about. You want to grow your business? Stand for something that makes the wrong kinds of people hate you, so that the right kinds of people love you. Anything in-between is apathy. (For more on this topic: see “Related Reading #2“)

If it isn’t clear by now: apathy is fatal to forming meaningful relationships. Even more so for business relationships. Doesn’t matter if they love you or hate you — just don’t let em be neutral!

So (welcome TL;DR crowd!) your one specific, actionable tip is this:

Get a 3×5 card and complete these three statements:

Relentlessly pursue #3, acknowledge you don’t want ‘just any old customer’, and commit to loving the things you listed under #1 and possibly taking an active stand against the items in #2.

Note from Tea of Story Bistro: Once you’ve completed those statements, come visit us on Facebook and tell us what you came up with and what it means to you. Was it easy for you to complete those sentences? Hard? No right or wrong answers here — we’re all just experimenting!