My Personal Battle With Comparisonitis (and How I’m Making Peace) 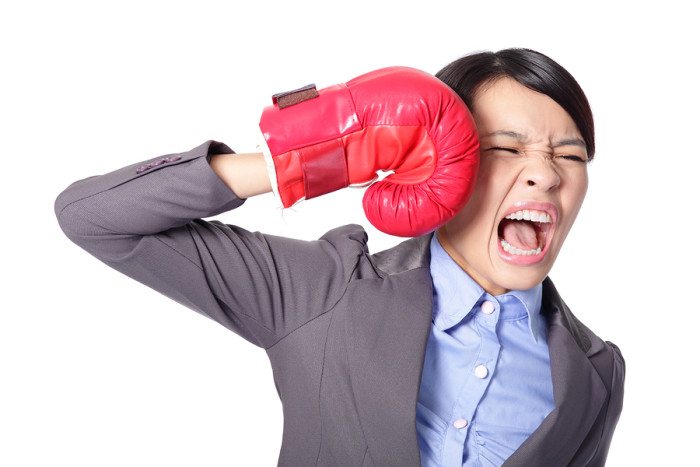 She’s a gnarly bitch that Comparisonitis.

She and I bump heads at least once or twice a year.

(When I was younger, it was more like once or twice a month.)

You’d think I’d be less surprised now when she sidles up beside me. And not-so-innocently whispers in my ear, “Have you seen So-and-so’s website? She’s got it goin’ on.”

The not-so-subtle implication that I — in fact — don’t.

Once in awhile she’ll even suggest I should just pack it in now and quit.

There’s no use in trying, Tea. You’re never gonna get there.

Maybe you’re familiar with her shenanigans, too?

You look at what others are doing and feel the lump of discouragement growing in your gut?

It feels like your business is in a bit of a slump? Or that comments and shares are almost non-existent? Nobody’s opening your emails…?

From your vantage point, it might seem like everyone (but you) is “crushing it” and you wonder what-the-hollandaise is wrong with you?

Just last month I compared my business and marketing materials to no less than THREE other people. And each time, I mentally punched myself in the head: Why didn’t YOU think of that, Tea?! or Why aren’t you producing results like that?

Gawd, this comparing crap is exhausting!

It wastes so much valuable energy.

Energy I could spend on taking real action.

So why do we let the crazy happen?

I was wondering the same thing when I saw a post in a private Facebook group* — by a respected colleague! — lamenting pretty much the same shallots.

She was feeling like giving up. Like she’d never achieve the same level of success as the folks she admired.

Guess what? In the space of less than 24 hours, more than 20 other you’d-think-they-had-their-shiz-together biz people responded. At length! Sharing their own struggles with the uglies of Comparisonitis.

One wise and lovely voice (Rachna Jain of Profitable Popularity) asked this question:

If you look at all the places you’re comparing yourself, what’s the wish, dream or desire underneath that comparison?

Or, in other words, those feelings you’re having? They’re activating a goal for you. They’re helping you clarify what you want more of.

And CLARITY (as we know!) is true power.

Know who you are & what you want. Then you won’t need to hurry. Clarity provides the momentum! << (Click to Tweet!)

Is it a business that’s easier to run? Is it acknowledgment and recognition? Maybe it’s just more money?

Whatever you desire, those yearnings aren’t wrong, bad or shameful. So stop beating yourself up!

The Simple Truth is that I’m one of your biggest fans.

I have SO much admiration and respect for who you are as a human being — AND as an entrepreneur. (Only the finest human beings show up here, by the way!) 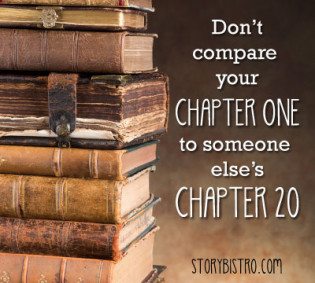 You may not be where you want to be with your biz just yet, but hey — neither am I.

The destination is always just over that last hill.

And when you climb that hill, you’ll see another. And another.

But you’re making real headway. Can you admit that to yourself?

All of us are at different spots along our story line. And those spots are exactly where we’re supposed to be!

We can’t compare ourselves to those who are over the next hill. That’s an apples-to-oranges mistake, right?

Sure, it feels like lately you can only take one or two baby steps forward, but those baby steps add up over time.

And if very real things are falling through the cracks and your To Do list just gets longer by the hour…the bottom line is that you’re still creating change. Change for yourself and change in the world around you.

Here’s a fabulous (non-traditional) suggestion from another of those wise souls on that FB thread:

We have to give what we want more of. I consider it tithing. If I want more recognition, I’m going to focus on recognizing three people every day for the next week. I’m going to make sure someone knows they’re respected and that they belong, and I’m going to do it A LOT. It somehow always boomerangs back to me. And honestly, even if you’re doing it with the initial idea of also getting it, WHO CARES? It’s still a lovely thing to give.”

So here’s what I did in response to the comparisons I was making:

1. Instead of wishing (again) that I’d thought of that cool product idea, I bought one for myself and sent a friend request to the woman who sells them. (After all, how cool would it be to be friends with someone with genius ideas?) — Want to admire what she does for yourself? Check it out here: cryswilliams.com.

2. Instead of wondering (again) why the open rates for my emails aren’t where I think they should be, I opened, read and responded to three email newsletters that I’d been deleting without reading for awhile. (Do you do that, too?) And then I committed to doing it again every day or unsubscribing if I’m just not that into ’em. Want to join me? Add your name to my FB challenge.

3. Instead of feeling (again) like I’d missed the boat because someone else published the book that I wanted to write, I hired an editor to help me pull together all my existing content. That’s right. I’m on my way to getting those words and advice out to a wider audience. Do you need an editor, too? Go see Annie.

I’m not a fan of violent metaphors, so choosing to stay in a “battle” that I didn’t start (or at least not consciously) is not on my to-do list.

Instead, I’m making peace with myself by flipping all that negative energy on its head.

Now it’s your turn. What would you like more of in your business?

And what are you willing to do to help kick start the energy around that? Share in a comment below and let’s show Comparisonitis to the door. For good! 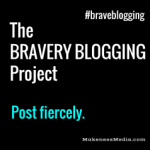 Note: This post is part of the Bravery Blogging Project. There’s a whole group of us saying what needs to be said. Click on over to read more.

If this post looks familiar to you, that’s probably because it first appeared in the world as an email to my lovely subscribers. Want to join them? There’s a form right over there to your right. —>

*That private group I belong to? It’s part of a group coaching program I’m in over at Wealthy Thought Leader. You should totally check ’em out. (Not an affiliate link.) And if you don’t join that program, you can always check out The Digital Dining Room. We do some pretty awesome stuff there, too.