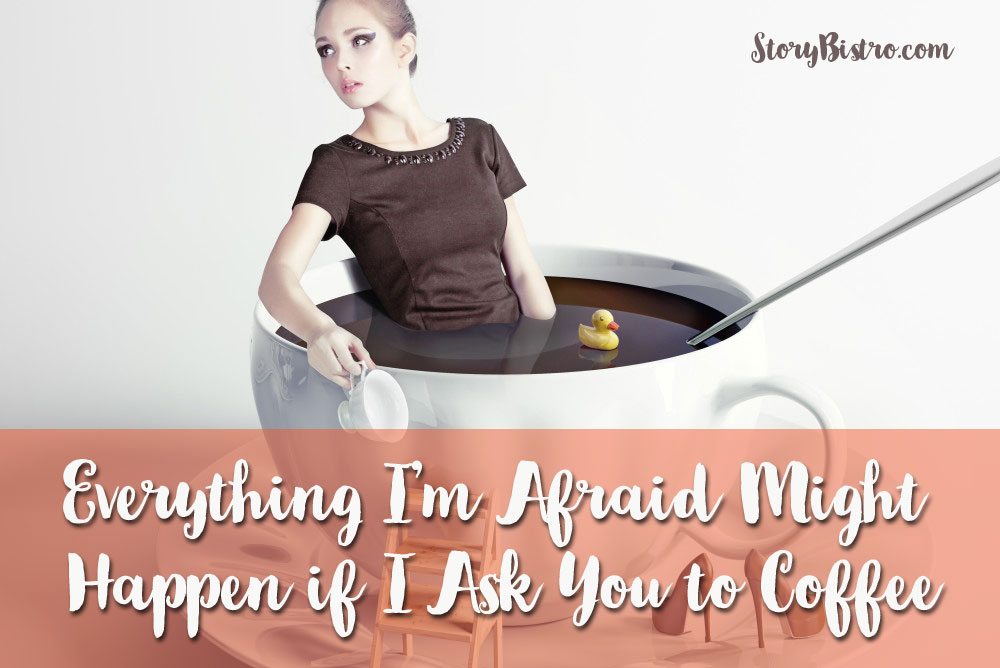 You and I have some seriously MAD storytelling skills.

We might not always tell the best marketing stories, but we sure do tell ourselves some pretty amazing things on a regular basis.

Unfortunately, those stories get in our way and keep us from creating the kinds of businesses we say we really want.

It’s not enough to get clear about your brand, or to master the art of blogging. Even the best marketing won’t be enough to kill those monsters in your head.

So let’s deal with a few of those now, shall we?

The truth is: We all have something we’d rather not do.

Cold calling is one of mine. Also: filing, bookkeeping, doing dishes, and sometimes yes, even writing.

Mostly because these things (depending on my current state) fail — in that particular moment — to inspire me.

I pre-judge them as either futile or mindless (occasionally, both).

Does any of this sound familiar?

“I don’t have anything new to say about that, so why bother blogging?”

“I’m not really making an impact here, I should just throw in the towel now.”

“My life is too crazy. I’ll do that thing I need to do when everything calms down.”

Sometimes I categorize these thoughts as things that will, at best, bore me and at worst, be horribly painful.

You might have some of these, too. Things like networking? Asking for the sale? Writing your marketing plan?

But you still gotta find a way to do those things that need doing. (Those dishes ain’t gonna wash themselves!)

And of course you want to give your best self to the process. (Chop wood, carry water and all that.)

So what’s a highly creative, whip smart entrepreneur to do?

Simple. Explore your difficult thing through the lense of humor.

Let’s take something most introverts (or introverted extroverts) like to avoid doing: asking a stranger to meet them for coffee.

A few weeks ago, I belly laughed at an article on The New Yorker website: “Everything I Am Afraid Might Happen If I Ask New Acquaintances to Get Coffee.”

(The post was written for 20-somethings who’re trying to make new friends).

Guess what? Reaching out to a prospective client or partner is also a HUGE challenge for a lot of biz owners. (No, it’s not just you.)

I thought, why not create a version of that article for entrepreneurs? And wouldn’t it be a fun group project? (The more fears, the merrier!)

So I started a list over on Facebook in our After Hours group and asked folks to add to it.

The point was to be as outrageous and/or snarky as you wanted to be.

This is what we’ve come up with so far:

The point is that we ALL have some level of fear around reaching out to people we don’t know very well. There’s a very real (usually unspoken) expectation that the person doing the inviting is only doing so because she wants something. And who wants to look like THAT?

But relationships are THE main way you’ll build your business. In fact, “direct contact and follow up” with individuals is the most effective method of finding new clients. (According to every unnamed and uncited “expert” on the internet.)

Marketing tasks (like blogging, sending e-newsletters, and posting on social media) will NEVER be enough to close a sale on their own.

And that’s because relationships are the secret ingredient in every successful project, organization, or mission.

The greatest expression of your business requires other people.

Just like the best stories require an engaged audience. You can’t have one without the other.

That’s why — as challenging as it is sometimes to work into my schedule — I make a point of getting out of the house to meet other human beings and look them in the eye.

It’s why speaking gigs and webinars and in-person workshops get you a lot further with folks than writing a book or blogging alone.

When we see and hear each other up close and personal, we’re better able to determine the answer to questions like: Do I trust her? Does he really know what he’s talking about? Is this someone I want to work with?

When we’re in close physical proximity to each other, we also have a greater likelihood of sharing something personal. Being vulnerable. Exposing our hearts.

And when that happens, we’re finally seen as the three dimensional human beings that we really are.

So what’s the best way to reach out to a prospective client or partner?

Before you pick up the phone and ask them “out,” I recommend you connect with them on social media first.

Keep things short and sweet. Let the person know what attracted you (in a business way), but don’t ask for anything more than a slightly tighter connection than the one you’ve already got.

We haven’t met yet, but I loved what you wrote in our {name of LinkedIn or Facebook group} the other day about X. It really got me thinking about it on a whole new level. I appreciate having smart folks in my network and I’d love to add you to my friends list, if that’s okay?

This is a pretty simple formula:

1. Let them know how you know them.

2. Pay them a sincere compliment.

3. Ask for something simple like a FB friend request or LinkedIn connection (NOTE: this one is super easy AND nobody else does it so you will look like a wonderful human being. It’s highly unlikely they’ll say no.)

Once you’re connected, make a point to interact with that person further. Leave comments on their status updates. Reply to their tweets. Share something of theirs with your peeps (be sure to tag them so 1) They know you did it; and 2) Your network can find them and learn more about them, if they want).

Perhaps send them a link to an article you think they might enjoy. And then, only after you’ve done your best to nurture the relationship into something warmer and you feel like there might be some mutual interest, reach out and invite them to coffee — either virtual or in-person.

(Note: I often find a virtual coffee is a much easier “yes” these days. We are all busy and taking time to travel somewhere means a greater investment in time and energy.)

The virtual coffee is the phone call. And all of that other stuff you did before you got to that point has warmed them up.

So…it’s no longer a scary proposition.

And it it IS still making your knees knock, try channeling Julia Child just before you hit send on that email invitation:

If you’ve had a virtual coffee with someone and it went well, make a point to invite them to other things — a fun meetup you enjoy, a webinar you’re hosting, or even an in-person coffee.

Remember, relationships aren’t created out of thin air. At least, not the good kind.

So take your time, be brave, and reach out to someone new.

Special Thanks to the following folks for contributing to this list:

So what stories do you tell yourself about networking?

Are you comfortable extending invitations to (and following up on) one-on-one conversations that could help you grow your business? Do you have something to add to our list? Leave a comment below and let’s keep this important conversation going.